Sounds from Sensors with Mozzi

Sounds from Sensors with Mozzi 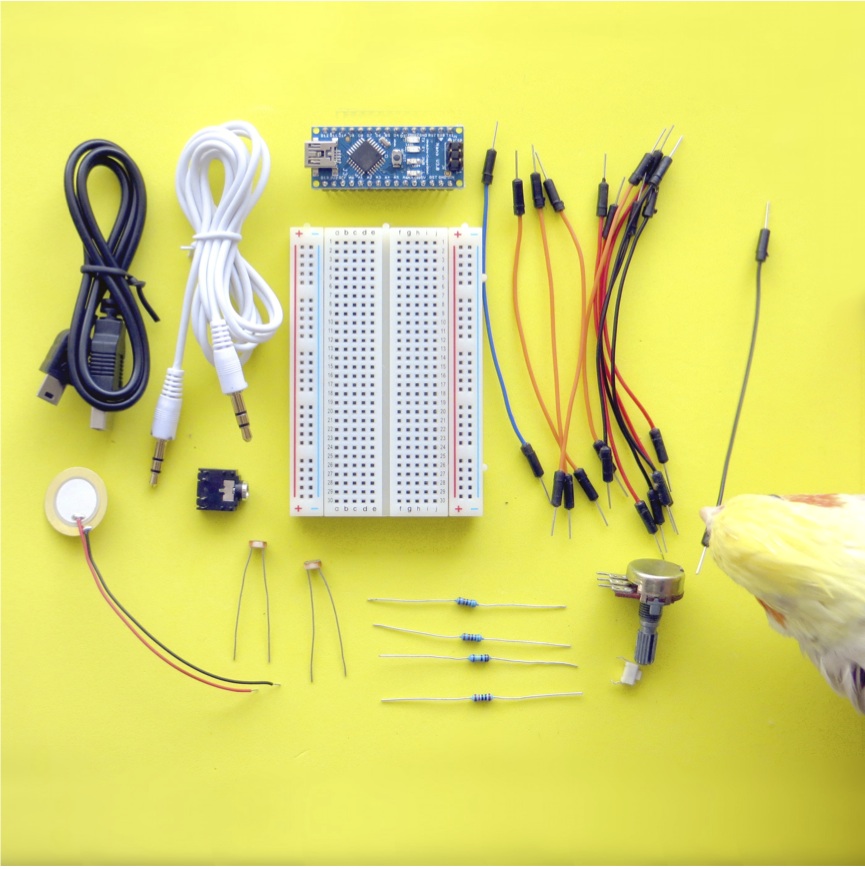 Figure 1: Parts used in the tutorial

Push the Nano into the breadboard with top left leg of the USB end at c1. Plug a mini USB cable into the Nano and connect it to your computer.

Let’s test it by uploading a program into the Nano through the USB serial port. Arduino➞File➞Examples➞Blink and press the ➜ (upload) button to upload the program to the Nano.

The red light on your nano should be blinking once per second. Edit the code to make the light blink twice as fast by changing the delay from 1000ms to 500ms. Yay, it works.

OK - now the Arduino is working we are ready to install Mozzi.

When we wire things together on the breadboard let’s all use a common wire colour protocol.

Unplug the USB cable so that there is no power, just in case you plug a wire into the wrong place. 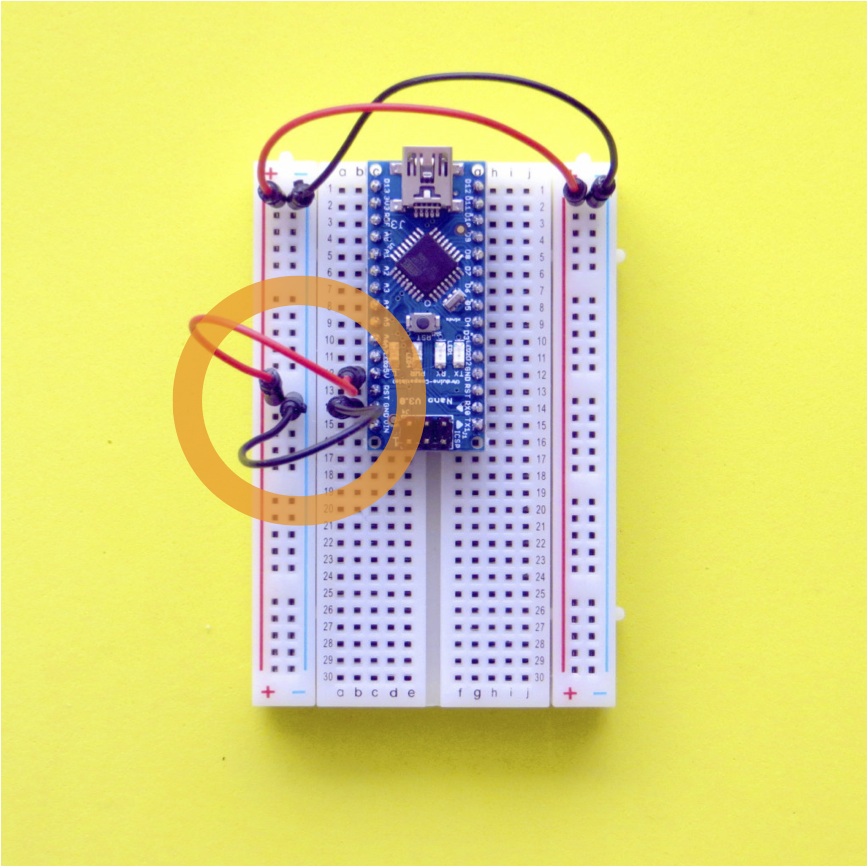 Now let’s add a headphone socket so we can listen to sounds synthed on the Nano. 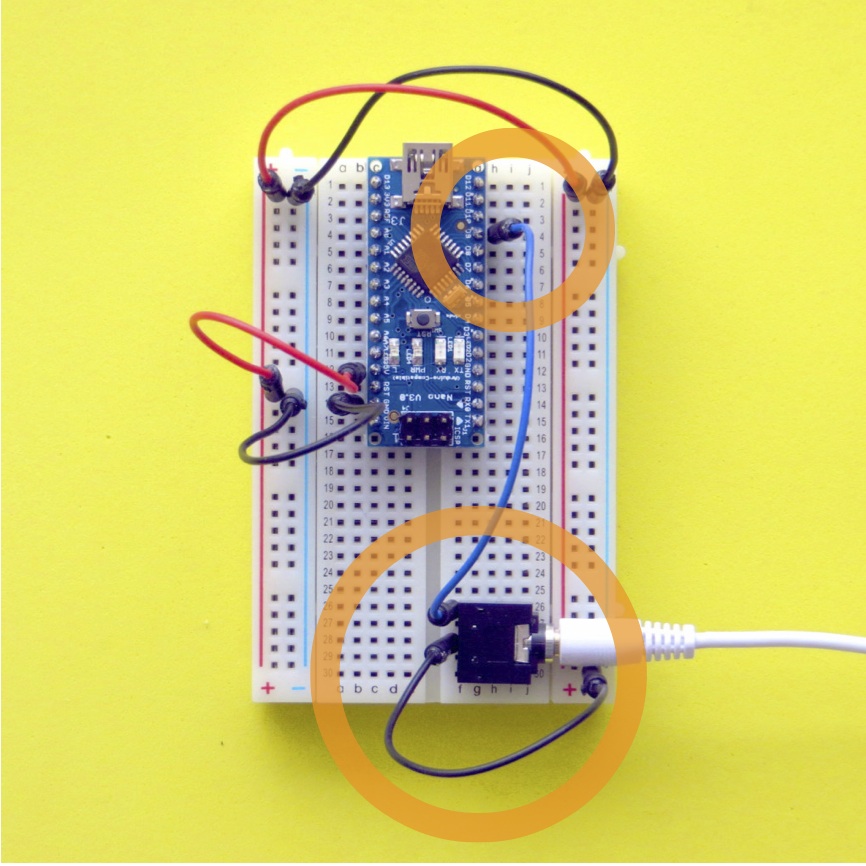 You can listen to the sound on your computer by downloading and installing Audacity, a cross platform audio editor.

Some new laptops have a single audio socket that requires a 4-pole audio input cable. If you don’t have the cable then just listen to the audio through headphones which will be a bit noisy but good enough for learning….

Let’s test that it works with an example from the Mozzi library.

Try some of the other examples in the filters, delays, synthesis and sample folders to get a feel for what can be done.

Now let’s move on the next stage of sensing some input.

A knob (variable resistor, potentiometer or pot) has a middle connection which can be moved across a resistor, changing the resistance between the sweeping pin and each end.

Let’s make a circuit using a knob as a sensor.

Figure 5: Knob as input to Analog Pin A0 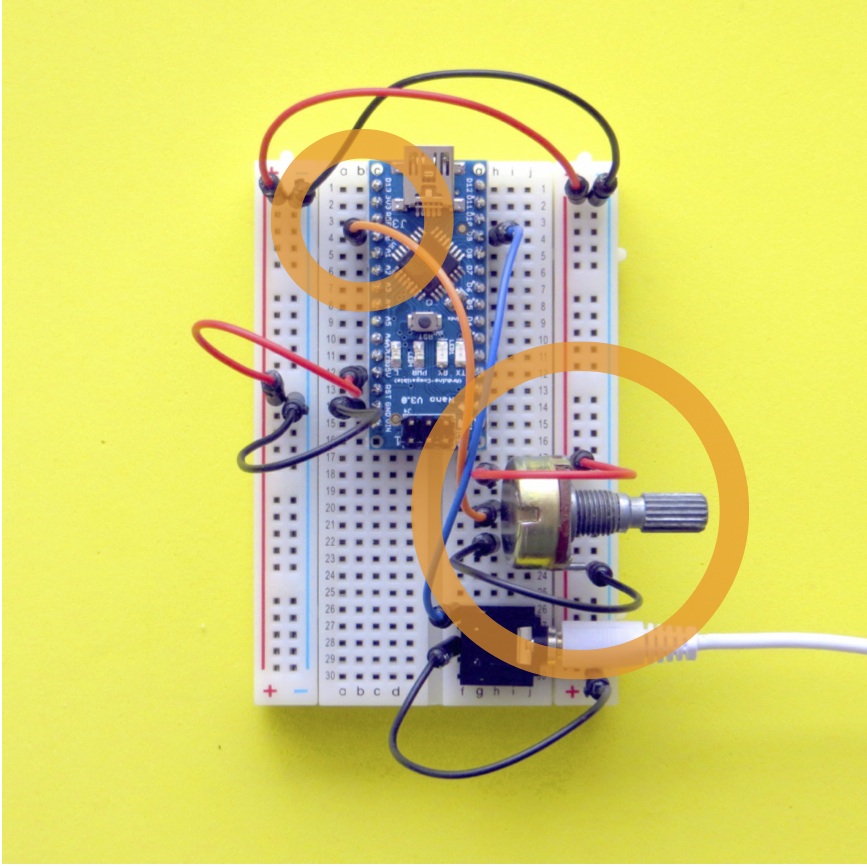 Now the voltage on the analog input will go up and down as the knob is turned. Let’s use the knob to change the sound volume in a Mozzi sketch. Arduino➞File➞Examples➞Mozzi➞03.Sensors➞Volume_Knob

This program reads the voltage on Analog pin 0 as an integer from 0-1023.

A Light Dependent Resistor (LDR) changes resistance with the light level. Let’s use that to control an FM synthesis algorithm.

First, we’ll make the sensor circuit using a LDR and a 5.1k Resistor (green-brown-black-brown) as a voltage ladder as input to the Analog Input on the Nano.

Figure 6: LDR + resistor as input to Analog Pin A1 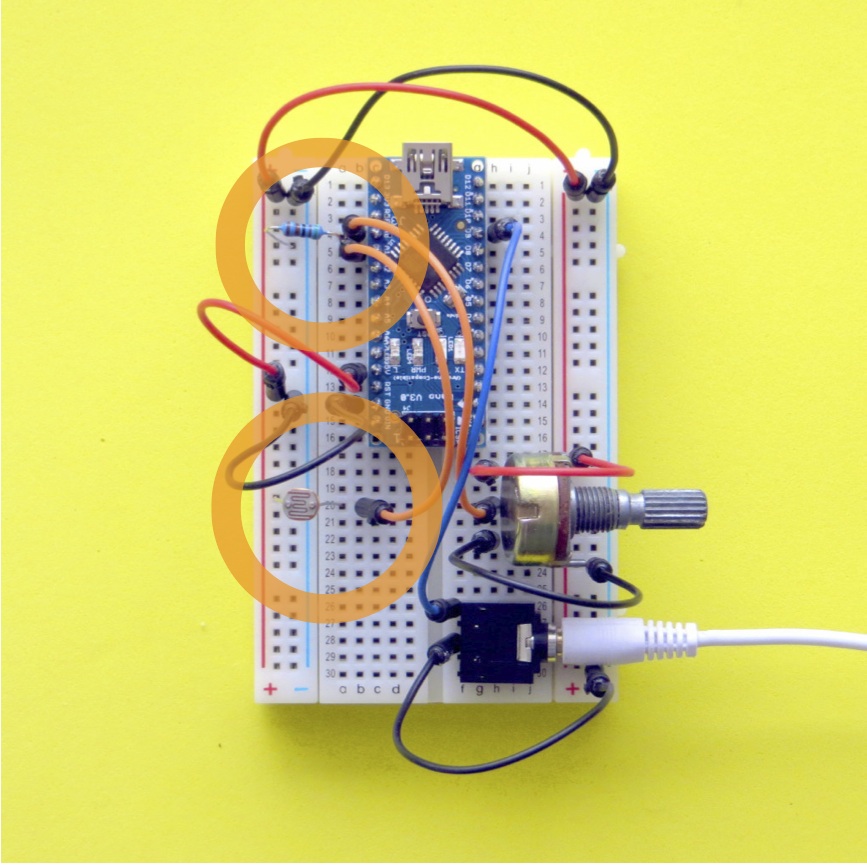 Now the voltage on the analog input will go up and down with the light level. The resistor stops high current draw on the USB port when the resistance of the LDR goes low.

Let’s test the LDR in a Mozzi sketch.
Arduino➞File➞Examples➞Mozzi➞03.Sensors➞Volume_Knob_LightLevel_Frequency

This program adds the LDR to the previous example, reading the voltage on Analog pin 1 to change the frequency of the sinewave. Use the Serial Monitor in the Arduino IDE to have a look at the numbers from the LDR. They should range somewhere between about 300-1000. Feel free to calibrate the sensor by changing the number mapping from the LDR to the oscillator frequency in the sketch.

Let’s try using the knob and LDR to modulate FM synthesis parameters. The knob sets the fundamental (or carrier) frequency and the LDR changes the modulation width, which affects the brightness of the sound. Arduino➞File➞Examples➞Mozzi➞03.Sensors➞Knob_LightLevel_FMsynth

Wow. Try to stay calm. We’re gonna make it twice as fun by adding another light level input to the FM synth.

Figure 7: LDR + resistor as input to Analog Pin A2 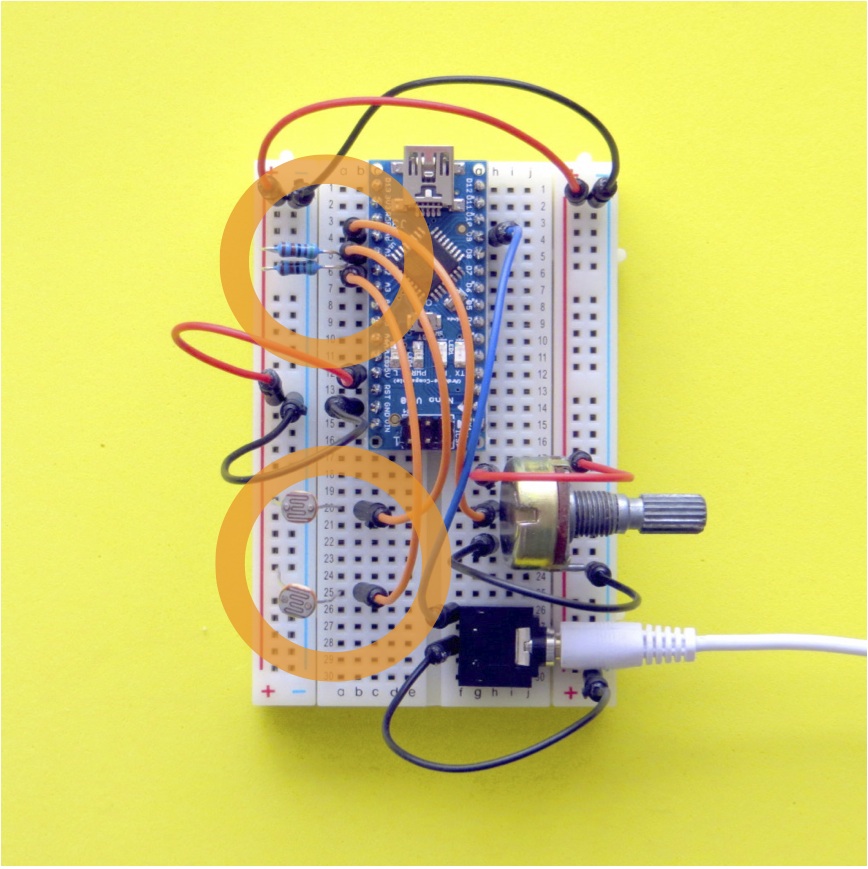 The three inputs will produce a range of vibratos and timbre modulations that are great fun to mess around with (depending on how excitable you are). In the sketch, you can calibrate your own mappings from the sensors to the synthesis wherever you see “calibrate” in the comments.

The same inputs can be used to play lots of different kinds of synthesis. Here’s another sketch using the knob and two LDRs. This one makes vocal-like sounds using wavepacket synthesis. Arduino➞File➞Examples➞Mozzi➞03.Sensors➞LDR_x2_Knob_WavePacket

A piezo creates a varying voltage when you squeeze it. We’ll use it as a sensor by measuring the voltage the piezo produces across a 1 megaOhm resistor (brown-black-black-yellow).

Figure 8: Piezo + resistor as input to Analog Pin A3 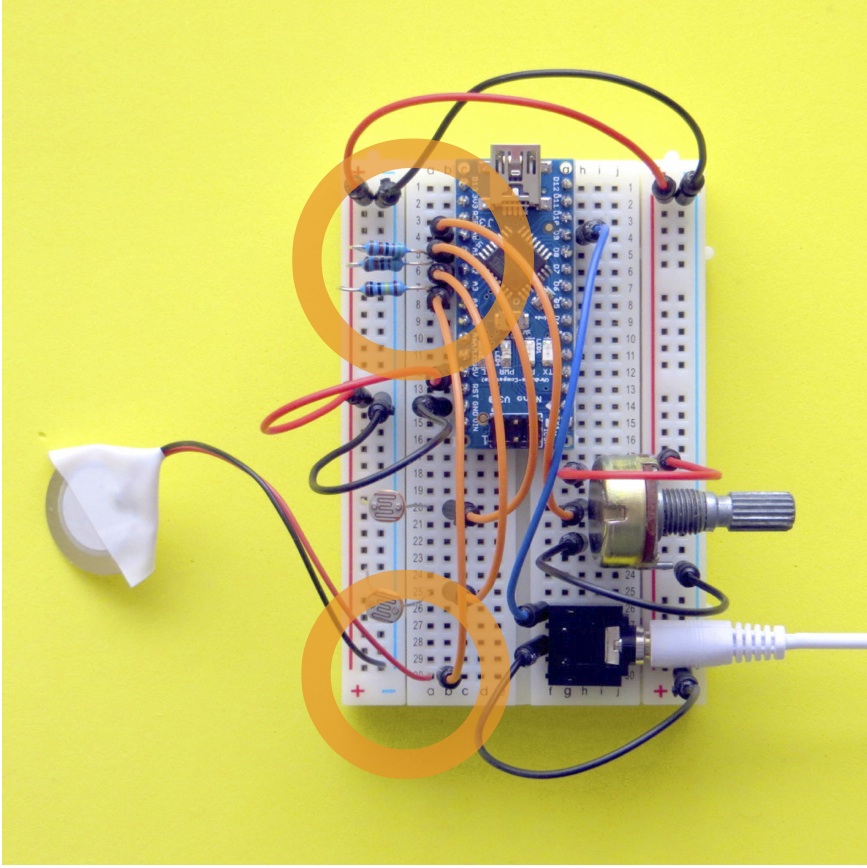 First, let’s get a feel for the piezo’s response with a simple patch. Arduino➞File➞Examples➞Mozzi➞03.Sensors➞Piezo_Frequency

Press on the piezo, tap it and scrape it to hear what it does. Notice it has a very fast response, especially a sharp attack and decay when it’s knocked. There are a couple of commented-out modifications in the sketch which can be uncommented to play around with the dynamics of the piezo signal.

Now we’ll use the sharp attack of the piezo to trigger a recorded audio sample to play, and for fun we can twist the knob to change the playback rate. Arduino➞File➞Examples➞Mozzi➞03.Sensors➞Piezo_SampleTrigger

The next sketch uses pressure on the piezo to scrub through a sample by changing the starting position. It’s crude, but you get the idea… Arduino➞File➞Examples➞Mozzi➞03.Sensors➞Piezo_SampleScrubber

So far all of the sensor inputs have been analog. Now we’ll add a digital input with a Button and a 10k Resistor (brown-black-black-red). 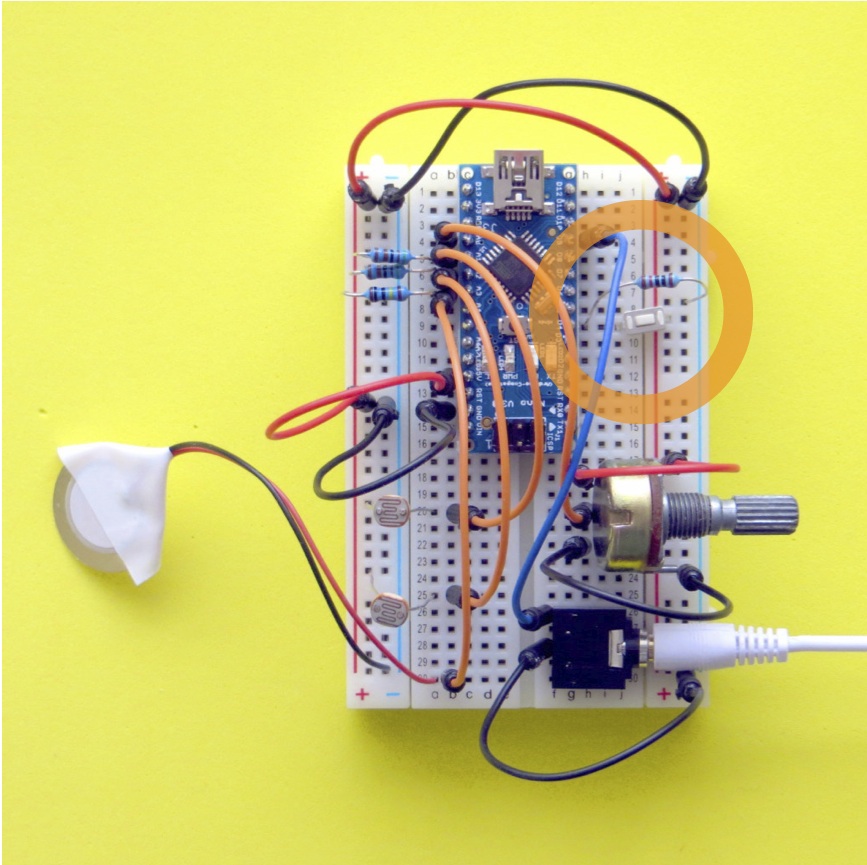 Let’s use the button to change the pitch of a sample trigger by the piezo.
Arduino➞File➞Examples➞Mozzi➞03.Sensors➞Piezo_Switch_Pitch

You can think of a better use for a switch than that!

Now we’ve got some experience using sensors to generate sounds, it’s time to expand the frontiers of sensor-based microsynthesis!

Tim Barrass and Stephen Barrass 2013. This work is licensed under the Creative Commons Attribution-NonCommercial- ShareAlike 3.0 Unported License. To view a copy of this license, visit https://creativecommons.org/licenses/by-nc-sa/3.0/.